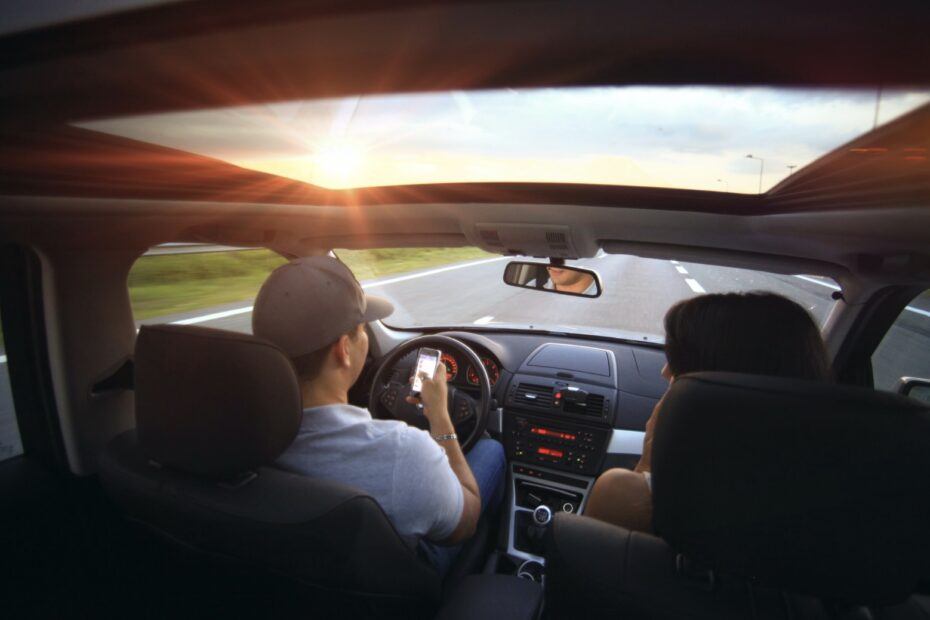 It’s not often that I write a review about an app that claims to pay you for not doing something.

However the something The OnMyWay App wants you to stop doing is using your phone whilst you’re driving.

So that can only be a good thing.

However, does it do what it also claims to do and reward you for developing safer driving habits?

This is what I will be finding out today in my review. To help me I will be discovering what real users of the app are saying about it, and weighing up the pros and cons to help you make a decision about whether you should sign up.

First however let’s get started by finding out how the app works.

How The OnMyWay App Works

As mentioned above, the OnMyWay App was developed to help solve a serious problem.

That problem is distracted driving, which according to the US Centers for Disease Control and Prevention, accounts for at least nine deaths every day.

To help address this problem, the OnMyWay App says it pays you to keep your phone locked whenever you’re driving.

The app‘s technology can detect the speed at which the phone is moving. It can detect whenever your device is moving at more than 10 mph. If it is you’ll be paid for every safe mile. 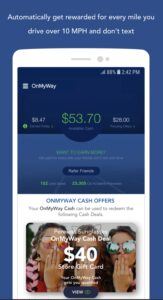 You can download this app for free. It’s offered to both Android and iOS users, so you can navigate to the respective store to obtain it.

The app will ask for your driver’s license in order to confirm your identity, so
you’ll need to scan it. You’ll also need to register by using an email address and the last four digits of your phone number.

Your driver’s license is required in order to confirm that you are a driver. This helps to avoid having people earn points while they are on the train or are using another method of transportation.

However, some people who use the app view this type of request for information as an invasion of privacy.

The app states clearly that your information may be shared with advertisers. It’s important for you to read the terms carefully and learn about how it will use your personal information.

The app explicitly states that your information is shared with those who wish to purchase space to share a deal on the app.

Once the OnMyWay App is installed on your device and it’s on, it will be activated automatically whenever your smartphone is moving at more than 10 miles an hour.

It automatically disables app alerts and text messages, so you’ll be less tempted to check them.

You have to give the app permission to do that. It can’t just stop you from getting text messages without your approval.

In fact, while you’re installing the app, you’ll notice that you have to give several permissions so that it can do its job effectively.

Make sure you read the terms carefully. These permissions will give the app freedom to track your phone’s location at any time once it’s on. The app will also be able to log the pages that you access with the device.

How To Earn On The OnMyWay App

The OnMyWay App gives all new members a sign-up bonus of 10 OMW. The site describes this as $10.

However, it’s important to know that wherever the site speaks about dollars, it is really referring to OMW not US dollars.

The app doesn’t always make this clear and it’s important to remember that in most sections where you see rewards described, they’re actually referring to OnMyWay dollars or OMW.

The app also rewards you for every mile that you drive as long as you’re not distracted. You will receive $0.05 for every mile, if you aren’t texting or engaging in other behaviors that the app is designed to prevent.

This app is designed for everyone, whether you drive a car, van or truck. People who drive for commercial purposes will benefit a lot from using this app. For example, truck drivers who drive lots of miles for work every day will earn more daily.

The OnMyWay App has a referral program. You probably know lots of people who drive and have a tendency to answer texts on occasion while doing so. You’ll receive $2 for every new person who signs up to the app by using your referral link.

You can locate your unique referral link on the app once you’re signed in. You also receive a bonus of $0.02 for each mile that each of your referrals drives without being distracted.

For example, if you have 10 referrals and together they drive a total of 100 undistracted miles for the week, you’ll receive a bonus of $2 for that week.

Initially, you would also receive a signing bonus of $2 for each of those referrals. This would be equal to a total of $20 just for signing up.

The app also helps you to get referrals. Whenever a call or text comes in to your phone while you’re driving, the app will automatically send a message saying that you’re unavailable.

How To Withdraw From The OnMyWay App

To redeem your rewards on this app, first ensure that you’re logged in.

On your home screen, you’ll see the Cash button. You can tap that to cash out once you’ve met the requirements for payout.

You can’t easily cash out on this app by using PayPal or bank transfers if you don’t have at least $1,000 in your account. You can only cash out sums of less than $1,000 through their Marathon deals.

In addition, you’ll have to refer 250 new drivers in order to qualify for cashout.

The marathon deals include gift cards in various denominations. Other rewards include Travel Rewards, Gas Cards, and Store Deals 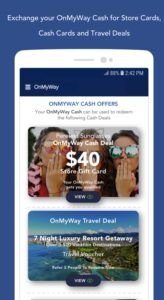 Some of the rewards however are offered in limited quantities. For example, only a hundred gift cards in a particular denomination might be available.

If you try to exchange your points for one of these gift cards, you may not be able to get it because there might not be any of those gift cards left.

Marathon deals include discounts at stores. These may be offered by local stores. This means that when you log into your account you’ll see promotional offers from stores in your vicinity.

The OnMyWay App has received good feedback from users who appreciate the fact that it helps them to improve their driving habits.

It has a rating of 4.4 on Google Play. Although their rewards aren’t huge, drivers like to get a little incentive for doing the right thing.

Some users however are concerned about the extent to which the app might interfere with their privacy. You have to give quite a few permissions in order to use the app.

The brand hasn’t established itself enough to be as trusted as an older company that has more proven products on the market.

Some users who are interested in earning cash aren’t satisfied with the rewards that are offered on the app.

Technical glitches have also caused some users to stop using the app. For example, people say that when they drive out of town the app doesn’t track their miles properly.

What Are The Pros Of The OnMyWay App?

What Are The Cons Of The OnMyWay App?

Some Final Thoughts On The OnMyWay App

In this OnMyWay App review, you’ve learned how you can earn rewards by keeping your phone locked while you’re driving.

The premise of the app is a good one and it can help to prevent a lot of accidents on the road.

Despite that, drivers should not expect to get rich by using the app.

However, if you want a little encouragement to engage in safer practices while you’re behind the wheel, this will help.

You’ll have to use the app for a while before you qualify for cash out. This is due to you having to first refer a number of people to the app.

This app can’t be recommended as an effective money earning opportunity. If you’re not very efficient at getting referrals, it will take a long time for you to get paid.

However, it can be recommended as a tool to help you avoid distracted driving.

Star Rating 2.5/5-An app with the very good intention of helping you to drive more safely. However, the earning potential may not be good especially if you struggle to refer others.

Thanks for checking out my review of The OnMyWay App. I hope you found it informative and helped you gain a better understanding of how the app works and if it is likely to benefit you.

You will find more reviews like this one, and other informative articles HERE